An inventory of St Lawrence church, vicarage and contents made in 1828 does not mention an organ, though there is reference to “a large yard in which are a Pigstye, Dung-hole walled round, and Servants Necessary” and a “ Fire Engine & Eighteen Buckets.” Given that the list is so detailed that it mentions “Four benches and three mats for the Children belonging to the Sunday School” it is reasonable to conclude that there was no organ at this point in the church’s history and that any music required was provided by the members of the Singing Gallery.

There was a major reorganisation of the church in the early nineteenth century. In 1829 two new galleries were erected at a cost of £400. Then in 1835 £153.6.8 was paid towards new pews and a gallery. In 1838 the Revd Edward Leigh Bennet, who was the vicar at the time, gave an organ to the church. The specifications of this instrument are not known. The earliest mention of an organist in the parish records dates back to 1839, though the transcription may be slightly erroneous since it refers to a Jacob Walklett, who was also Parish Clerk and undertook duties such as cleaning the wall round the churchyard. It is possible therefore that Walklett may have been the organ blower rather than the organist.

In 1854 an organ was purchased from the church of All Saints, Faringdon for £300. This instrument was built by Parsons and dated back to 1831. It had eight stops on the Great organ, four on the swell and a short pedal-board of only one octave compass. Early photographs of the church show an organ of 1830s appearance located on the gallery at the west end of the church. Specification details are given on the British Institute of Organ Studies web-site.

In the late nineteenth century there was a second major reorganisation of the church when the North Gallery was condemned as unsafe. In 1882 a faculty was received for new floors and seating. The high deal pews were replaced by low pews of pitch pine, the pulpit, reading desk and gallery were removed and the Parsons organ moved to the east end of the north aisle. 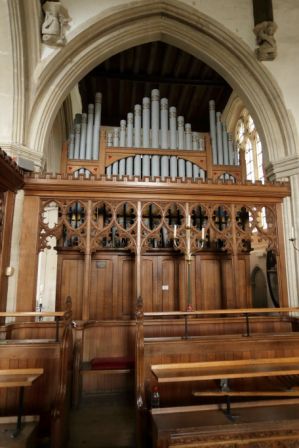 The current organ was purchased in 1888 from Nicholson & Son of Worcester at a cost of £305.0.0. This was funded through subscriptions together with £1.2.11 from the sale of the old organ. The instrument was commissioned in July 1889.

In 1926 the organ was dismantled, cleaned, overhauled, the pedals and action were repaired and ivory keys and new wiring added. This work was carried out by Nicholson & Co Worcester for £61.0.0. Funds were raised from a rummage sale (£20.19.6), subscriptions (£25.18.4) and a percentage of the collections taken at the Harvest Festivals from 1922 to 1925.

Although the church had benefited from electric lighting from at least 1916, the organ blower was not converted to electric power until 1945. On the wall of the north aisle there is a memorial tablet to Alfred George, who was sexton from the 1890s until 1928. One of his responsibilities was to pump the organ when required.

In 1965 the organ rebuilt with innovations and improvements by Percy Daniel & Co. of Cleveden £928. It is likely that at this point the straight pedal board and swell mechanism were replaced with a radiating pedal board and balanced swell pedal, and the pedal action converted to an electro-mechanical system. The Clarionet stop on the Great was replaced by a Mixture and the 4’ harmonic flute with a wald flute. The Swell 8’ Gamba was replaced by a 2’ Fifteenth and a 4’ wald flute with a gemshorn. A 8’ principal stop was added to the pedal section, though this was simply derived from the Great organ rather than being an extra rank of pipes. Details of the specification at this point are given on the British Institute of Organ Studies web-site at http://www.npor.org.uk/NPORView.html?RI=N05721

In 2003 the organ was restored by Keith Jones with the intention of increasing the versatility of the instrument. Two new pedal ranks were added outside the main body of the organ, an 8’ bass flute and a 16’ violone which incorporates old Nicolson pipework. A 4’ pedal stop was also added, though this is derived from the Great organ. On the Great, a Stopped Diapason was substituted for the Clarabella and a Sesquialtera for a Mixture. On the Swell, the Fifteenth was replaced by a Mixture and the Oboe with a Trumpet. The swell box shutters were reconfigured to reflect sound into the nave rather than a wall.

Specification details are given on the British Institute of Organ Studies web-site.

Information compiled by organist Anne Margaret Crow with help from the records of Chris and Maureen Baxter, to whom our sincere thanks.