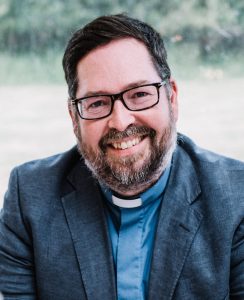 Originally from N. Ireland, Andrew went to the University of St Andrews, Scotland, where he obtained an MA in English Literature.
After working in finance for several years in the City of London, he trained for ordination at Wycliffe Hall, Oxford, before a curacy at Holy Trinity, Clapham and then as Assistant Minister at All Saints with Holy Trinity, Wandsworth, whilst also completing a PhD in Church History at the London School of Theology.
Andrew has been vicar of St Lawrence since 2011 and now also has pastoral responsibility for St. Peter’s, Southrop and St. Andrew’s, Eastleach. Further responsibilities in the diocese of Gloucester include being co-Area Dean, a training incumbent, and helping with ministerial reviews.
He is married to Kate and they have three children.  His sporting interests include following the fluctuating fortunes of the Irish Rugby team! 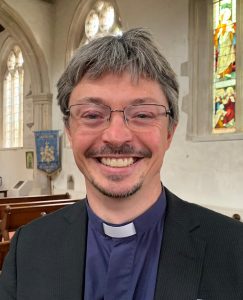 Originally from the borders of north London, Gareth studied English at university, and then worked for an aid and development charity before going back to university for postgraduate study in medieval literature. He taught at the University of Bristol for 14 years, before training for ordained ministry at Oak Hill College. As part of the South Cotswolds Team Ministry, he has been the curate at St Lawrence, Lechlade, St. Peter’s, Southrop and St. Andrew’s, Eastleach since 2021.
He is married to Sonia and they have two children. He loves reading, snooker, long walks, and talking to people about Jesus.

Andrew is assisted and supported in his role by a curate (see above); licensed lay ministers including Ian Taylor and Gordon Land; retired clergy David Bainbridge and Andrew Kirk; and a team of lay congregation members who assist with planning and leading services.

Church Wardens Richard Bell and Susan Holmes provide lay leadership within the Church as well as taking responsibility for the smooth operation and maintenance of the facilities and buildings.

The Parochial Church Council (PCC) is the constitutional governing body of the church.  All on the Electoral Roll may vote to appoint representatives to the PCC.  Elections are held at the Annual Parochial Church Meeting with PCC Members appointed for a term of three years.

Our Parish Office is the first point of contact for queries relating to St Lawrence Church in Lechlade, St Andrew’s Church in Eastleach and St Peter’s Church in Southrop.  The best way to get in touch with the Parish Administrator is via email – info@stlawrencelechlade.org.uk – or phone 01367 358653. The Office is only manned part-time so please don’t expect an immediate response from a telephone message.

Chris Saunders has served as a full-time youth worker for almost 20 years in far-flung settings such as Aberystwyth, Walsall and Ukraine. He has been in post here since March 2009 and loves the variety of every week. His role involves running a number of clubs in schools and communities, engaging young people to consider Christian faith through discussion, bible study groups and 1 to 1 meetings. He also manages a small team of volunteers to support youth via youth services, residential trips, confirmation classes and a whole host more.  When he’s not looking for ways to use his two children in his sermon illustrations he enjoys watching (successful) Welsh rugby.